The last several months have been incredibly busy for me and as such, several significant topics I have been meaning to write about have not happened. Getting into those topics, the first one to mention is that I have switched my "go-to" footwear to match my new after my issues with knee pain and transitioning from a rear foot strike pattern to a mid-forefoot strike with a higher cadence. As it turns out, I had kept several pairs of my old Asics in my closet, meaning to recycle them, so I pulled them out to examine the wear patterns. The first is an example of my Enduro 2's from about 2006. 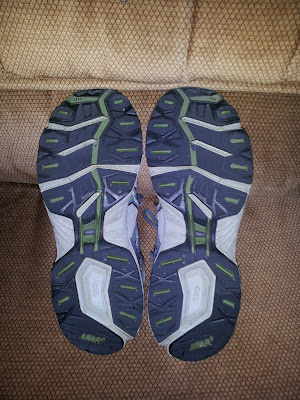 So with these shoes, while I wore them for several months, the lining wore out more than the soles did. The wear pattern is limited, but you can see in the center of the midfoot, the wear is most obvious in the green line that is running the length of the shoe, suggesting that my foot strike was mostly midfoot. Next up is the same shoe, newer version, from circa 2009. 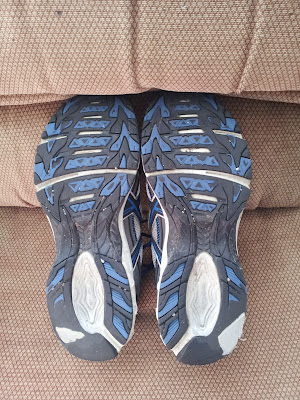 Now, while some wear is obvious in the midfoot, you can see that I have done something notably different with my foot strike because the heels are shredded! The grey color there is where I have worn clear through the black layer. So, I do not have any particular recollection of changing my stride between these eras of running. The typical total miles/week also did not change that much. My thought is that I was focused on running and did very little cross training and got into a poor-form rut without noticing. The result was the knee pain that I mentioned before. That pain led to some strengthening exercises which have been very helpful for me. Once I started paying attention to my foot strike and my cadence, I found it easy to switch to a midfoot strike, and looking through my shoe history, I wonder if I was not a natural midfoot striker when I started and then got sloppy over the years. 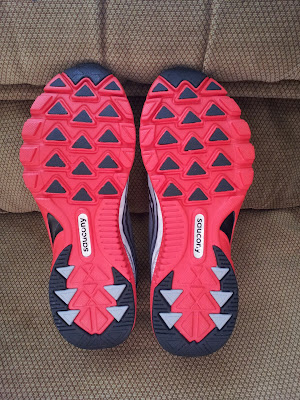 So the one serious problem I noticed with footstrike and cadence changes is that the Enduros were now more difficult to run in. Why? The wedge of the heel (heel-toe drop about 14mm) made the footstrike quite difficult. So I spent a lot of time reading the Runblogger and settled on trying a pair of the Saucony Kinvaras. These brand new Kinvaras have a heel-toe drop of about 4 mm and I just love running in them. At a recent race expo, the local shoe store had some Kinvaras for sale, alas, not my size, but when I was browsing them, no less than 4 people commented on how much they loved them, how quickly they sold, or asked what I thought of them. Clearly, Saucony has done something right, or at least popular. 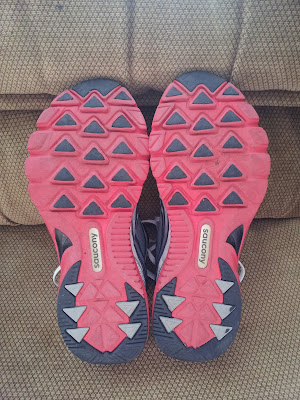 So, a couple of races under my belt with plenty of miles and my Kinvaras have some wear. A little is on the outer heel (note the grey triangle with black peeking through) but the majority of wear is actually on the outer midfoot. The wear is a little harder to see, but the texture of the ridges is notably worn. I am very happy with the Kinvaras, they feel great, and I have got my next pair waiting in the closet once these wear out.
Posted by Dave Winchester at 3:00 PM