Going from the Jacksonville Marathon to Disney was a bit of a shock seeing as how I was going from my smallest race to the biggest race weekend ever (55,000 people for either the 1/2, full, or race-and-a-half challenge). In my opinion, they did a pretty good job with logistics given the scale of the event.

-Read the race materials. This is a big race and the PDF's they email you have a lot of good info on how to run this race successfully and not get lost/confused.

-I stayed at the Beach Club, which is an "Epcot area" resort". This had the benefit of being at mile 24 on the course so that family could literally walk out back and see me if they wanted. Staying at these resorts, however, did not let me avoid the buses in the AM. The "International Gateway" which lets you walk into the World Showcase directly from the Epcot resorts, is not open for runners to get to the staging area.

-The buses start at 3A to take runners from the resorts to the staging area. They say that you must be on by 4 or risk not being at the start in time. I trusted them at their word (having almost missed other race starts), but there were plenty of stragglers coming in somewhat later. I would still recommend going ahead and getting there early to be sure.

-The staging area consists of a stage with music, a merch tent (in case you DON'T have enough Disney gear), and the bad check. The bag check went smoothly, just remember you must use the goody bag from the expo, you cannot check your own bag.

-Portapotties: abundant at the start and throughout the race. I waited about 5-10 minutes to do my business (as opposed to 20-30 at my last two races).

-Walk to the start from the staging area: DON'T underestimate this walk. In the program, they mention the distance and time in the race materials, but I did not realize where it was, what they meant, etc. I thought it was another exaggeration to get people to hurry along but there is a long (10-15 minute) walk before you get into corrals. I got into mine, but not in enough time to get to my projected race gathering and so I was definitely behind when the gun went off.

-Bitter freakin' cold: it was 28 degrees at race start with a wind chill to 16. Now, if anyone could magically change the weather, it would be Disney, but they could have at least tried to rustle up a couple extra tents or a space heater or two. We went to the merch tent to stay warm and got booted for not buying stuff. Then we went to the bag check tent and got booted for blocking the area (which we were not doing). Then they gave up when we (and everyone else) went to other tents to huddle for warmth. People were using the exhaust from the floodlamps to heat up. Okay, three more facts (which are true) and then I'll shut up about the cold. 1. The water cups had frozen caps of ice, refreshing in Florida summers, not so much on a January race morning. 2. The water spilled on the road at water stops was freezing and they were salting the roads to keep us safe. 3. I kept a cotton sweatshirt thinking I would toss it after warming up, which I never did, so I ran all 26.2 in a cotton sweatshirt which wicked sweat away from my poly underlayers and then FROSTED over on my chest! Okay, enough about the cold.

-Given the treats on the course, the snacks at the end of the race were kinda skimpy. I've run races where you can have all the powerbars and protein shakes you want, but the best thing at this race's finish were full bottles of Powerade. Although I admit, I don't really care that much about this since after 26.2 miles nothing is more glorious and tastes better than lemon-lime sports drink.

-The course: I list as negative, but it's not really. Going through the parks is gorgeous, but account for probably less than 25% of the race. Mostly it is on the roads connecting the parks which are dull Central Florida roads with overpasses and exit ramps serving as hills. It is excellent, however, that since Disney owns all the roads, there is barely any spot where there are cars (just a couple of minor backlot spots). The arduous trek from the Magic Kingdom (about halfway) to the Animal Kingdom (about 5 miles) is pretty boring, and the only spot where I used my MP3 player. The water treatment plant we passed was a not-so-lovely scent of, well, let's just say it didn't smell very Disney.

-Excellent support: Some of it was sporadic, but running through the parks was awesome. The low point as noted above was Magic Kingdom to the Animal Kingdom but even back there, the Central Florida accordion squad was out performing. High school bands and cheerleaders were out, and there were several DJ's along the course. The final run is a counterclockwise loop through the World Showcase and they use the speakers there to blast encouraging tunes.

-Food and water: In a word, abundant. Two banana stops, two gel stops, a candy stop, and water it seemed like more than every mile. If you get dehydrated on this race it is only your fault. Of course, there are plenty of first or only-time runner of 26.2 on this course, so dehydration, but also hyponatremia are problems that they have got a special section in the race info about these conditions, which you should read if you are new to this sport.

-The medals: Big, obvious, shiny gold deals. No one here has any modesty about them either, which I think is fun. People wear them for days afterwards if they stay to do the parks and it’s a lot of fun to be walking through tens of thousands of people, many of whom ran with you, and it makes it so easy to strike up a conversation about something you love to do. I sat next to someone on Expedition Everest in Animal Kingdom who had her Goofy Race and a Half medal on and she told me that by the time they came through the Animal Kingdom on race day, that the park was open, so they asked the staff if they could ride the coaster. The staff put them at the front of the line and let them ride before they went off to finish the marathon! Plenty of other Disney-goers also ask about the medals and it is fun to tell them about it.

-Getting off the couch of doom: Disney gets some disdain from some runners because it is slow and many people barely finish or walk most of the race, but you know what, they finish. This is more than we can say for a lot of Americans. Most of my family is talking about doing a race now, and so were people I talked to in the parks. Who knows how many of these will actually do a race, but who cares? Running as a sport/hobby/way-to-stay-fit gets a lot of exposure from races like Disney and if that means just a few more people get off the couch of doom and lace up, I am all for it and more than happy to share the road with them.

Congrats to everyone who has their Donald, Mickey, or Goofy medals, and especially to everyone from 2010 who braved the bitter cold to earn them! 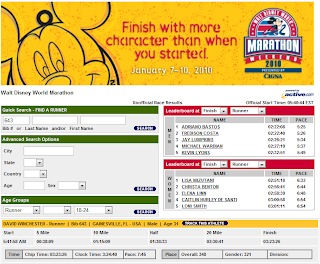 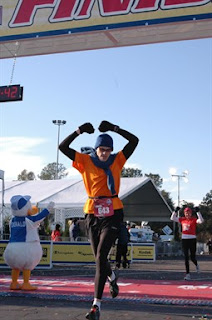 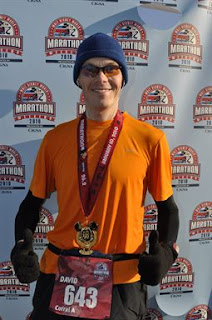 Posted by Dave Winchester at 12:54 PM