A quick run and walk with Jeff Galloway 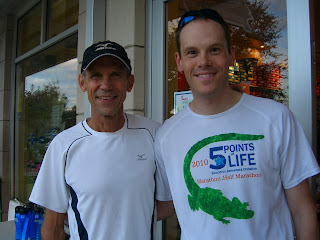 This week I had the pleasure of meeting Jeff Galloway here in Gainesville. He came to town to announce the start of a Gainesville based Galloway run-walk program with the goal race being the Run with Donna half in Jax in the Spring. He started his afternoon at Gainesville Running and Walking in Tioga Town Center, where he did a run/walk of about 2 and a half miles with a group of some 30 runners. Later he came to the Florida Track Club meeting and shared stories, wisdom, advice, and some laughs with us about his decades-long running career (including as a founding member of the Florida Track Club and colleagues with the likes of Frank Shorter and Jack Bacheler).

Having not seen him talk before, I don't know how many of these stories are common ones for him to tell but some of the things he discussed or opined on include:


So, those are the notes I took. I really enjoyed the talk. I found Jeff gracious and willing to stick around for quite some time after the event signing things and answering everyone's questions. His career and the run-walk method could obviously fill several books of text, but this is how it went down in Gainesville on Tuesday the 19th!

I've got a video I'm going to post later, so stay tuned for more.
Posted by Dave Winchester at 8:27 AM